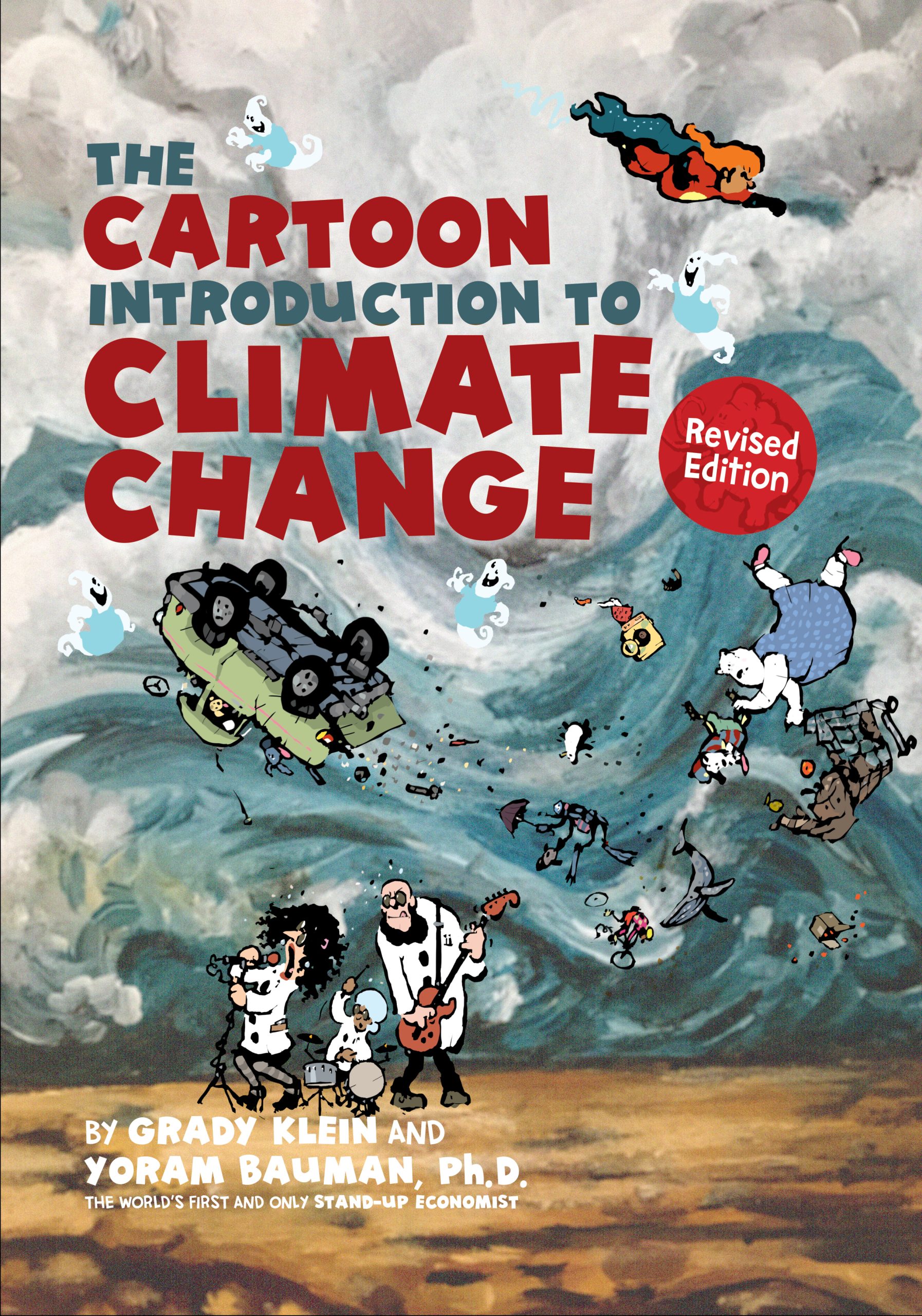 Ask your local bookstore for my new book (co-authored with and illustrated by Grady Klein, and published by Island Press, ISBN 978-1642832334), or you can order it for about $29 from Amazon.com or B&N.

Here are excerpts, reviews (some from the 1st edition), corrections (none so far for the Revised Edition!), and information for teachers about PPTs and more. Also detailed page notes plus rights info for foreign translations. (FYI the 1st edition is now out in French and Chinese simplified.)

Details about upcoming shows here, please contact me to bring economics comedy to your school, corporate event, or comedy club! If you are with a public high school, community college, or the armed forces, or are otherwise looking for a free show, click here.

From the Island Press book page, click on “CASE STUDIES” for access to Chapters 1 and 2 (“Introduction” and “A Brief History of Planet Earth”), plus the front cover and Table of Contents. (And here’s just a JPG of the cover.)

Reviews from the inside and back cover

“Fresh! Cheeky! Accurate and inspiring! An accessible, friendly, and fun explanation of climate change – free of politics, free of jargon, and fresh with insights. Cartoons you can believe in!”
—Jane Lubchenco, Wayne and Gladys Valley Professor of Marine Biology, Oregon State University, and former Administrator of the National Oceanic and Atmospheric Administration (NOAA)

“Climate is no laughing matter — but it beats crying. Maybe this is the secret passage into people’s hearts and minds.”
—James E. Hansen, former Director, NASA Goddard Institute for Space Studies, and author of Storms of My Grandchildren

“I know we’re trashing the planet, but do we have to add to our misery by reading gloom and doom books about it? The Cartoon Introduction to Climate Change offers another way: learn some serious science, evaluate strategies for change, and have a good laugh in the process.”
—Annie Leonard, creator of The Story of Stuff

“Are you curious about the science and economics of global warming? You can find many dull books on the subject. A better bet is The Cartoon Introduction to Climate Change, which tickles and teaches at the same time. Who says that sophistication is only in equations?”
—William Nordhaus, Sterling Professor of Economics, Yale University, winner of the 2018 Nobel Prize in Economics, and author of The Climate Casino: Risk, Uncertainty, and Economics for a Warming World

“A clear, concise rendition of the story of human-induced climate change, candid and yet brimming with warm-hearted humor and well-founded optimism. Gently persuasive, beautifully illustrated… an innovative springboard for discussion of what we can do as individuals and as a society to turn down the heat in our planetary ‘compost pile.'”
—John Michael Wallace, Professor Emeritus, Department of Atmospheric Sciences, University of Washington, and co-author of Atmospheric Science: An Introductory Survey

“Rarely do you read books that attempt to deal with the world’s biggest problems and present the information in a way that the average public can absorb it. Bravo to Yoram Bauman and Grady Klein, and thank you on behalf of everyone who is deeply concerned about this issue.”
—Mark Reynolds, Executive Director, Citizens Climate Lobby

“Illustrated with deceptively simple black-and-white art that masterfully supports the text, this book provides a skillful tour of the issues that face our developing world and it serves as a model of how educational works of this sort should be crafted.”
—Publishers Weekly

“It’s difficult to imagine that a book about climate change could be easy to understand, let alone funny. But Yoram Bauman and Grady Klein’s The Cartoon Introduction to Climate Change, an illustrated book that walks readers through the basics of climate science, is both… approachable and engaging.”
—The Nature Conservancy

Additional reviews of the 1st edition:

Named one of the “seven best business books about science to give for the holidays” by the Wall Street Journal (!). Plus terrific web reviews from Publishers Weekly and Kirkus Reviews (both copied below), the LA Times summer reading list, plus economics prof/blogger Bryan Caplan (more responses #1, #2, #3, #4, #5, #6, plus a bet). On the enviro side there’s “my new favorite book” from DeSmogBlog’s Brendan DeMille, Connor Gibson on the Greenpeace blog, the Nature Conservancy magazine (June/July 2014 issue, not online sorry), Ryan Walker in Earth Island Journal, Conservation magazine, and The Ecologist.

“The Cartoon Introduction to Climate Change will tickle your fancy while expanding your mind. Highly recommended.”
—Martin Weitzman, Professor of Economics, Harvard University

From the National Center for Science Education (click on “Download this PDF file” for the full review): “Written by the world’s only “stand-up economist,” the text brings levity to the material with puns and other jokes, and does well in avoiding an alarmist tone. Rather, the authors create a hopeful ending that manages to leave the reader feeling informed about the large scale of the interrelated problems of climate change, but also inspired towards change. This in particular makes the text a particularly attractive choice for educators working with middle school students, for it provides a factual perspective on the likely issues of the near future, while also avoiding portrayals of the problem as past the point of any hope of change.”

From Kirkus Reviews: “An often amusing graphic primer about an issue the authors recognize as apocalyptically serious. If alarmism proves polarizing where global warming is concerned, maybe humor can bridge the divide and build a consensus. Such would seem to be the strategy of Bauman, who bills himself as “the world’s first and only standup economist,” and cartoonist Klein; both collaborated on The Cartoon Introduction to Economics (two volumes, 2010 and 2011). The authors admit that there have long been wild fluctuations in climate before there was any ecological concern, that human activity is only part of the issue and that the doomsday scenario that some find inevitable is in fact uncertain. Having established a tone of moderation, invoking scientific method rather than ideology, Bauman and Klein nonetheless reinforce the realities of global warming, fossil fuels and greenhouse gases as potentially catastrophic. “The key fact about business as usual is that it would make [carbon dioxide] emissions explode,” they write, while softening the punch with an analogy involving China and cakes (a guitarist and feedback feature prominently elsewhere). Projecting through the century, “[u]nder business as usual emissions could rise 250%…pushing atmospheric [carbon dioxide] concentrations up near 1000 ppm.” The perspective of “environmental economics” distinguishes this analysis from that of a natural scientist or an environmental ideologue, for the authors insist from the start that economic growth, particularly in Asia and Africa, will be a dominant theme throughout the century (and a positive force) but that the profound environmental impact of all that growth is likely to accelerate climate change, unless the world at large faces the problem and its implication and arrives at consensus that might slow the process. Though the book’s approach is entertaining, its message is nonetheless urgent.”

And, via Twitter, from Gavin Schmidt, who days later was named Director of the NASA Goddard Institute for Space Studies:

Email me if you find anything!

Information for teachers (including PPTs!)

If you ‘re a college or high school instructor looking to adopt the cartoon book(s) for a class, check out the information here. (Here’s info on desk copies or examination copies.) For information about PPTs please click on the Resources tab here or contact me. Click here for detailed page notes.