Our forthcoming Cartoon Introduction to Calculus features a joke about the epsilon-delta definition of limits. The basic idea behind the joke sounds simple enough: American universities that are part of the Greek system have fraternities and sororities that are known by two or three Greek letters—e.g., Delta Gamma—so the the joke envisions a sorority called “Epsilon Delta”. (Haha!)

I think this is hilarious for all sorts of reasons, including that it reminds me that once, as a young math major at Reed College, I shaved an epsilon-delta into the back of my head. It also reminds me of a good friend I have who is a DG; without her encouragement and support back when I first started doing stand-up comedy, I wouldn’t be where I am today. (Thanks AP!)

As you can see from the thread below, however, we struggled mightily to get the joke right: it turns out that making a joke that mixes together mathematics, women, the Greek system, and the idea of beauty raises a lot of red flags. (Who knew?) For the record, there’s good reason for red flags: there’s a history of sexism in mathematics, see for example Emmy Noether; there’s ongoing gender bias issues, see also everything from STEM Ph.D.s by gender to the “math is hard” Barbie controversy; and there’s tons of issues about the Greek system and its stereotypes and realities, ranging from community service to alcohol abuse and sexual assault. And I haven’t even thrown “the idea of beauty” into the mix yet!

Hopefully we succeeded in navigating the treacherous currents here while still producing a funny and educational joke, but I’m sure we’ll hear from folks if we didn’t. (There’s a comment section below, and I’m @standupecon on Twitter.)

Evolution of the joke

Here’s the evolution of the joke, starting with two images from the original sketch drawing that combine to show the layout of the whole page (click images to enlarge, and note that the final version of the page can be found in this PDF of Chapter 5: Limits): 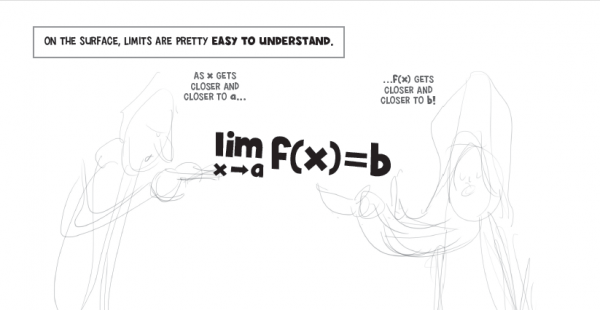 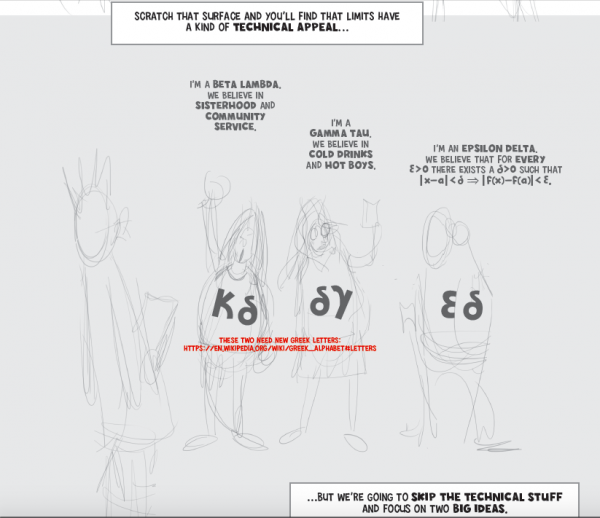 Here’s our first attempt at finished artwork for the key frame (note that “technical appeal” has become “technical beauty”): 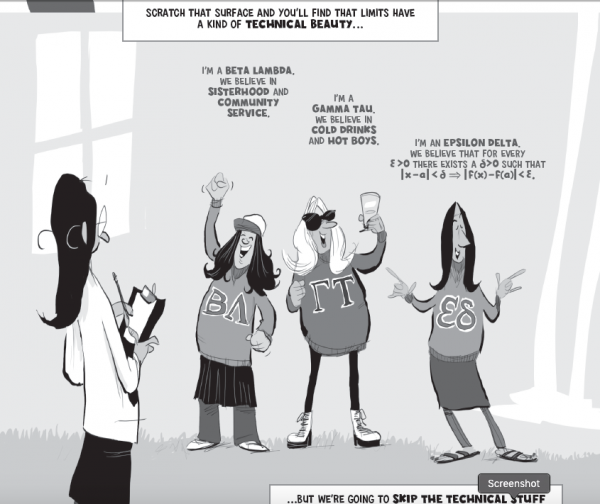 But we got negative feedback, especially about the character on the left, from my DG friend (who happens to be a fashion maven).

So we tried this: 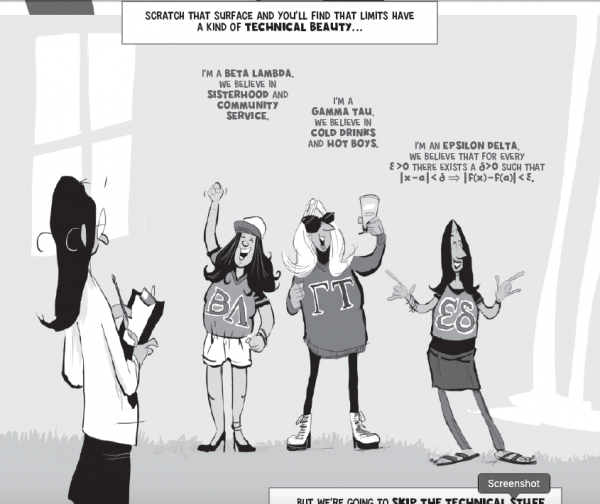 I’m not sure that’s any more fashion forward! Plus this latest attempt drew this response from an internal reviewer:

We’re a bit worried about how it’s playing on stereotypes. It’s clear to me that you are trying to subvert the stereotypes, but I’m wondering if it ends up still reinforcing them, or making a joke somewhat at their expense.So, I propose a few changes that should be pretty easy. First, I think we should revert the drawing of the leftmost figure to the more gender-noncomformist style. The heels were not well-received in my informal straw poll… Second, we should either eliminate the middle figure entirely, or just change “cold drinks and hot boys” to something else. Maybe another math joke? Maybe something else entirely–or something equally scholarly?

Here’s part of a long commentary I wrote in response:

IMHO the frame raises red flags because it contains a volatile mix of five items: (1) the party culture encapsulated in the line about “cold drinks and hot boys”; (2) the idea of “beauty”; (3) women; (4) math; and (5) the Greek system. Of these, I think only (4) math and (5) the Greek system are essential to the joke, and I don’t think those two items by themselves raise any red flags. So I think we should try to get rid of the other three items or minimize them to the extent possible:

1) The line about “cold drinks and hot boys” is not essential to the joke, so I’m willing to get rid of it… but i don’t think we should nix the middle character. (That would run counter to the “rule of three” in comedy.)

2) Instead of the text saying “technical beauty”, how about saying “technical elegance”? I think that’s just as good of a description of epsilon-delta proofs, and I think “elegance” is much less fraught of a word than “beauty”. In addition:

3) “Elegance” is a much less gendered word than “beauty”, so if we say “elegance” then it would be easier to include men in the frame, which will also make it less fraught. Or it’s possible that changing “beauty” to “elegance” means we could keep this as three women, which might be fine.

So here’s my suggestion: Change the text from “technical beauty” to “technical elegance” and then change the image to a fancy charity ball kind of scene.

So we changed it to this (note that “technical beauty” has become “technical elegance”): 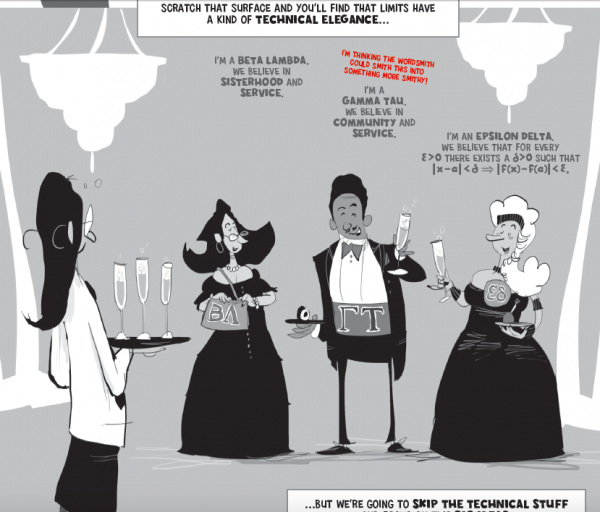 But then I complained that the character on the right looks like a 19th century matron, hence this final version (which, again, is part of this PDF of Chapter 5: Limits): 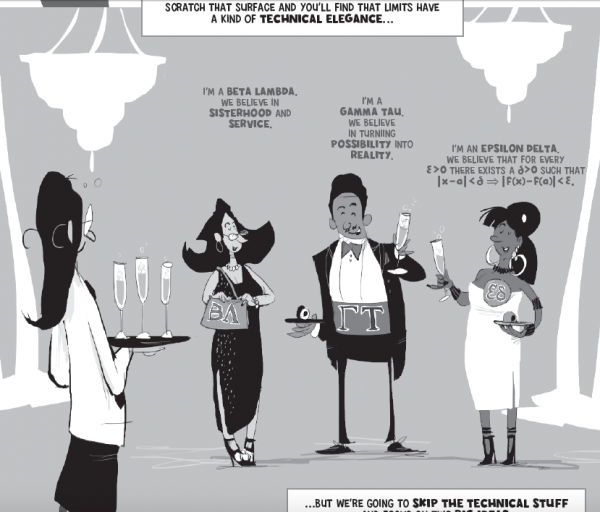 Hope everyone likes it!