A response to Bryan Caplan

Bryan Caplan of George Mason University has written a thoughtful review of my Cartoon Introduction to Economics, so I want to offer a response, starting (for no really good reason) at the bottom of his review and proceeding to the top. 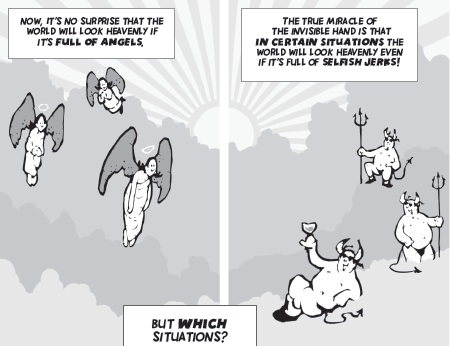 We first find Caplan arguing that my co-author Grady Klein and I “shouldn’t have run away from self-interest in chapter 1.” I don’t think we ran away from the important ideas here—a picture is worth a thousand words, and at the end of the chapter you find the devils-in-heaven graphic copied on the right: The true miracle of the invisible hand is that in certain situations the world will look heavenly even if it’s full of selfish jerks!—but Caplan is right that we start with the basic assumption of “individual optimization” and not “individual self-interest”. And the reason is—geez, Bryan, do we really have to rehash this tired old argument?—that (1) as a theoretical matter, “individual self-interest” is impossible to define or defend in a scientifically rigorous way, i.e., I can always say “The soldier threw herself on the hand grenade because she wanted to” or “Bill Gates is giving his money away because it makes him feel better about himself”, and (2) as a practical matter, you get into a terrible knot when you start thinking about spouses and children and friends &etc. [PS. My personal opinion is that individuals tend to be myopic (near-sighted), meaning that there’s a bubble around them consisting of people that they care about, but they can’t see much beyond the bubble. I don’t think it’s either wise or warranted to go any further than that.]

Caplan next complains that the book does or doesn’t include-this-or-that, in particular that it includes a chapter on auctions but doesn’t include anything on public choice or cost-benefit analysis or price controls. It’s essentially impossible to defend against this kind of hobbyhorsing—this is why principles textbooks turn into 600-page doorstops—but I’ll try to mount a defense anyway. The book has a chapter on auctions because auctions are super-cool—a unique blend of sex appeal, accessibility, and insight into higher-level results like the Revenue Equivalence Theorem—and because you encounter news stories about auctions just about every day. And the book doesn’t cover public choice or cost-benefit analysis or price controls because it focuses on the question of Under what circumstances does individual optimization lead to good outcomes for the group as a whole? As a result the book hardly talks about government at all. [PS. Bryan, you and your fellow libertarians should be happy about this, so stop complaining! PPS. Price controls? Maybe in the translation for the Venezuelan market, but in the USA I can think of no better way to signal to students that you’re stuck in 1971.]

Next, Caplan argues that my book should emphasize the points he made in his book. (“I don’t see how any introduction to economics can tiptoe around the primordial fact that non-economists’ beliefs about economics are predictably wrong.”) It would be easy to dismiss this as sour grapes or one-track-mind, but I think there’s a more interesting point to be made: I am 100% opposed to what Caplan endorses, namely the current trend of trying to teach economics by showing students that their intuition is no good. It seems to me (based on what I admit is nothing more than my intuition) that efforts to do this are mostly doomed to fail, and that a smarter approach is to frame issues in a way that doesn’t create cognitive dissonance. For example, the main question in my book—Under what circumstances does individual optimization lead to good outcomes for the group as a whole?—is one that I find leads to a thoughtful discussion from Day 1, with students often (correctly) seeing both sides of the answer. [PS. Bryan, how do you mesh your view that economic intuition is all wrong with the view that all of economics is trivial?]

Despite all this complaining, at the top of his review Caplan gives the book a B+. Maybe there’s serious grade inflation at George Mason University, but I can’t help feeling like the victim of passive-aggression. If you like the book enough to give it a B+, you shouldn’t spend 90% of your review knocking it. At least say something nice about my co-author’s drawings! [PS. Midway through your review, Bryan, you claim that the book “ridicules” the work of Nobel laureates; as a comedian I’d like to point out that there’s a big difference between ridiculing someone’s work and lovingly making jokes about it. Comparing the Laffer Curve to a fad diet (“Eat more, weigh less!”) is ridicule; comparing the Arrow-Debreu results to evangelical preaching (“We have seen the invisible hand! We have felt its mighty power!”) is a sign of appreciation and affection.]