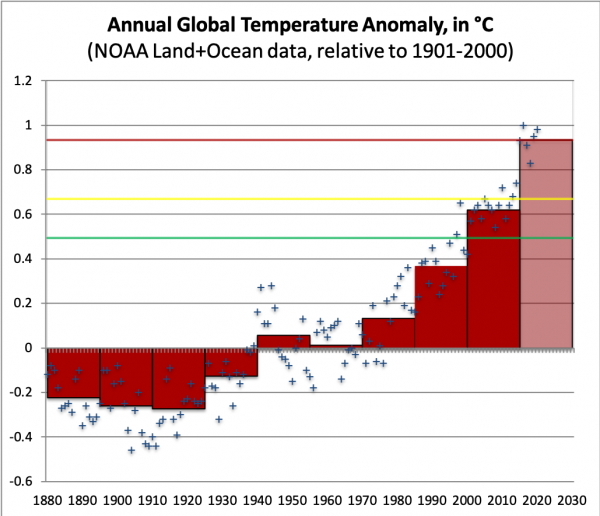 The short version is that the red line at 0.93°C represents average temperatures during the first 6 years of our 15-year betting period (2015-2020, inclusive); the yellow line at 0.67°C shows the finish line for the bet: if the red line is above the yellow line after another 9 years then I win the bet, and otherwise they win the bet; and the green line at 0.49°C shows how high average temperatures can be over the next 9 years for Bryan and Alex to win the bet. The good news for Bryan and Alex is that they can still win our global warming bet if average temperatures for the next 9 years are about 0.44°C lower than the average for the past 6 years! (But compared to last year the red line is moving up and the green line is moving down.) 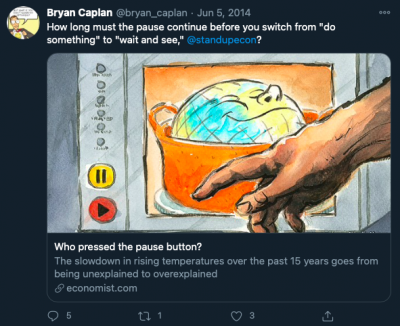 Bryan and I ended up making a bet about whether the NOAA global land-ocean average for 2015-2029 (for which the years-to-date are represented by the red line) would be more or less than the average for 2000-2014 plus 0.05°C (the yellow line). Bryan asked me for 2 to 1 odds, but I was so confident I gave him 3 to 1 odds. (Keep in mind that IPCC 2007 projected warming of 0.2C per decade for the next two decades, and IPCC 2013 said something similar.) I was also confident enough to suggest an “exploding bet”—where the amount doubles every year unless someone gives in—but he declined. So Bryan and I bet his $333.33 against my $1000, and then for good measure I gave his colleague Alex Tabarrok 5 to 1 odds, his $200 against my $1000, on the same topic: 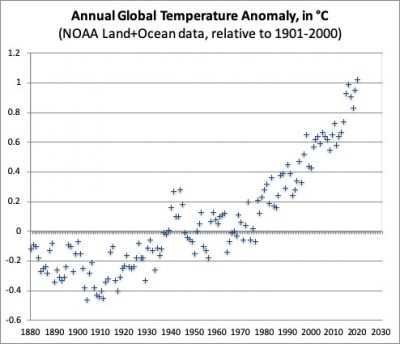